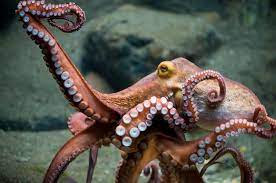 Octopuses are worthy of appreciation for a number of reasons. First of all, they are one of the earth’s great survivors. Indeed, despite their relatively short lifespan, octopus fossils date back more than 300 million years, meaning that they pre-date even dinosaurs.

Octopus are also highly intelligent. With around 500 million neurons located in their brains and arms, they are able to bypass their instincts, learn lessons and solve problems in a way that not very many other sea life creatures are able to. Some of them have even been seen to be creative, by using discarded coconut shells and making them into mobile homes. Ingenious!

In addition, octopuses are visually stunning, coming in various different colors, a multitude of sizes, and all sorts of shapes. Some live in the very shallow waters of the sea, while others can be found thousands of meters below the surface of the water. Sometimes called the chameleons of the sea, the octopus is often able to change colors to blend in with its surroundings as a form of protection against predators.